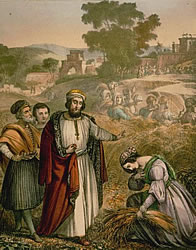 The Book of Ruth (abbreviated Rth) (Megilath Ruth, "the Scroll of Ruth", one of the Five Megillot) is included in the third division, or the Writings (Ketuvim), of the Hebrew Bible. In most Christian canons it is treated as a history book and placed between Judges and 1 Samuel.

The book, written in Hebrew in the 6th-4th centuries BC, tells of the Moabite woman Ruth, who accepts Yahweh, the God of the Israelites, as her God and accepts the Israelite people as her own. In Ruth 1:16-17, Ruth tells Naomi, her Israelite mother-in-law, "Where you go I will go, and where you stay I will stay. Your people will be my people and your God my God. Where you die I will die, and there I will be buried. May the Lord deal with me, be it ever so severely, if even death separates you and me."

The book is held in esteem by Jews who fall under the category of Jews-by-choice, as is evidenced by the considerable presence of Boaz in rabbinic literature. The Book of Ruth also functions liturgically, as it is read during the Jewish holiday of Shavuot ("Weeks").