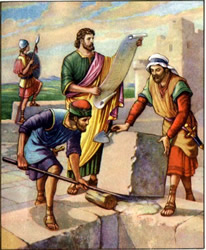 The Book of Nehemiah, in the Hebrew Bible, largely takes the form of a first-person memoir concerning the rebuilding of the walls of Jerusalem after the Babylonian exile by Nehemiah, a Jew who is a high official at the Persian court, and the dedication of the city and its people to God's laws (Torah). Since the 16th century it has generally been treated as a separate book within the Bible. Before that date, it had been included in the Book of Ezra; but in Latin Christian bibles from the 13th century onwards, the Vulgate Book of Ezra was divided into two texts, called respectively the First and Second books of Ezra; a separation which became canonised with the first printed bibles in Hebrew and Latin. Mid 16th century Reformed Protestant bible translations produced in Geneva were the first to introduce the name 'Book of Nehemiah' for the text formerly called the 'Second Book of Ezra'.

The events take place in the second half of the 5th century BC. Listed together with the Book of Ezra as Ezra-Nehemiah, it represents the final chapter in the historical narrative of the Hebrew Bible.

The original core of the book, the first-person memoir, may have been combined with the core of the Book of Ezra around 400 BC. Further editing probably continued into the Hellenistic era.

The book tells how Nehemiah, at the court of the king in Susa, is informed that Jerusalem is without walls, and resolves to restore them. The king appoints him as governor of Judah and he travels to Jerusalem. There he rebuilds the walls, despite the opposition of Israel's enemies, and reforms the community in conformity with the law of Moses. After 12 years in Jerusalem, he returns to Susa but subsequently revisits Jerusalem. He finds that the Israelites have been backsliding and taking non-Jewish wives, and he stays in Jerusalem to enforce the Law.