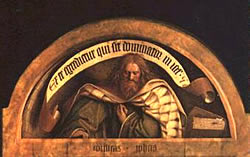 The Book of Micah is the sixth of the twelve minor prophets in the Hebrew Bible. Ostensibly, it records the sayings of Micah, whose name is Mikayahu, meaning "Who is like Yahweh?", an 8th-century BCE prophet from the village of Moresheth in Judah.

The book has three major divisions, chapters 1-2, 3-5 and 6-7, each introduced by the word "Hear," with a pattern of alternating announcements of doom and expressions of hope within each division. Micah reproaches unjust leaders, defends the rights of the poor against the rich and powerful; while looking forward to a world at peace centered on Zion under the leadership of a new Davidic monarch.

Chapter 1:1 identifies the prophet as "Micah of Moresheth" (a town in southern Judah), and states that he lived during the reigns of Yehotam, Ahaz and Hezekiah, roughly 750-700 BCE.

This corresponds to the period when, after a long period of peace, Israel, Judah, and the other nations of the region came under increasing pressure from the aggressive and rapidly expanding Neo-Assyrian empire. Between 734 and 727 Tiglath-Pileser III of Assyria conducted almost annual campaigns in Palestine, reducing the Kingdom of Israel, the Kingdom of Judah and the Philistine cities to vassalage, receiving tribute from Ammon, Moab and Edom, and absorbing Damascus (the Kingdom of Aram) into the Empire. On Tiglath-Pileser's death Israel rebelled, resulting in an Assyrian counter-attack and the destruction of the capital, Samaria, in 721 after a three-year siege. Micah 1:2-7 draws on this event: Samaria, says the prophet, has been destroyed by God because of its crimes of idolatry, oppression of the poor, and misuse of power. The Assyrian attacks on Israel (the northern kingdom) led to an influx of refugees into Judah, which would have increased social stresses, while at the same time the authorities in Jerusalem had to invest huge amounts in tribute and defense.

When the Assyrians attacked Judah in 701 they did so via the Philistine coast and the Shephelah, the border region which included Micah's village of Moresheth, as well as Lachish, Judah's second largest city. This in turn forms the background to verses 1:8-16, in which Micah warns the towns of the coming disaster (Lachish is singled out for special mention, accused of the corrupt practices of both Samaria and Jerusalem). In verses 2:1-5 he denounces the appropriation of land and houses, which might simply be the greed of the wealthy and powerful, or possibly the result of the militarising of the area in preparation for the Assyrian attack.

Some, but not all, scholars accept that only chapters 1-3 contain material from the late 8th century prophet Micah. The latest material comes from the post-Exilic period after the Temple was rebuilt in 515 BCE, so that the early 5th century BCE seems to be the period when the book was completed. The first stage was the collection and arrangement of some spoken sayings of the historical Micah (the material in chapters 1-3), in which the prophet attacks those who build estates through oppression and depicts the Assyrian invasion of Judah as Yahweh's punishment on the kingdom's corrupt rulers, including a prophecy that the Temple will be destroyed.

The prophecy was not fulfilled in Micah's time, but a hundred years later when Judah was facing a similar crisis with the Neo-Babylonian Empire, Micah's prophecies were reworked and expanded to reflect the new situation. Still later, after Jerusalem did fall to the Neo-Babylonian Empire, the book was revised and expanded further to reflect the circumstances of the late exilic and post-exilic community.