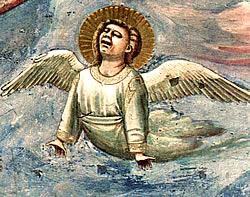 The Book of Lamentations is a collection of poetic laments for the destruction of Jerusalem in 586 BCE. In the Hebrew Bible it appears in the Ketuvim ("Writings"), beside the Song of Songs, Book of Ruth, Ecclesiastes and the Book of Esther (the Megillot or "Five Scrolls"), although there is no set order; in the Christian Old Testament it follows the Book of Jeremiah, as the prophet Jeremiah is its traditional author. Jeremiah's authorship is still generally accepted even though authorship isn't specifically notated in the text. Both Jewish and Christian tradition ascribe authorship to Jeremiah, and the Septuagint-the Greek translation of the Old Testament-even adds a note asserting Jeremiah as the writer of the book. In addition, when the early Christian church father Jerome translated the Bible into Latin, he added a note claiming Jeremiah as the author of Lamentations It is generally accepted that the destruction of Jerusalem by Babylon in 586 BCE forms the background to the poems.

The book is partly a traditional "city lament" mourning the desertion of the city by God, its destruction, and the ultimate return of the divinity, and partly a funeral dirge in which the bereaved bewails and addresses the dead. The tone is bleak: God does not speak, the degree of suffering is presented as overwhelming, and expectations of future redemption are minimal. Nonetheless, the author repeatedly makes clear that the city (and even the author himself) had profusely sinned against God, to which God had strongly responded. In doing so the author does not blame God but rather presents him as righteous, just and sometimes even as merciful.

The book consists of five separate poems. In the first (chapter 1), the city sits as a desolate weeping widow overcome with miseries. In Chapter 2 these miseries are described in connection with national sins and acts of God. Chapter 3 speaks of hope for the people of God: the chastisement would only be for their good; a better day would dawn for them. Chapter 4 laments the ruin and desolation of the city and temple, but traces it to the people's sins. Chapter 5 is a prayer that Zion's reproach may be taken away in the repentance and recovery of the people.