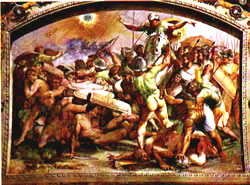 The Book of Joshua is the sixth book in the Hebrew Bible and the Christian Old Testament, and is the first book of the Deuteronomistic history, the story of Israel from the conquest of Canaan to the Babylonian exile. It tells of the campaigns of the Israelites in central, southern and northern Canaan, the destruction of their enemies, and the division of the land among the Twelve Tribes, framed by two set-piece speeches, the first by God commanding the conquest of the land, and, at the end, the second by Joshua warning of the need for faithful observance of the Law (torah) revealed to Moses.

Almost all scholars agree that the Book of Joshua holds little historical value for early Israel and most likely reflects a much later period. The earliest parts of the book are possibly chapters 2-11, the story of the conquest; these chapters were later incorporated into an early form of Joshua written late in the reign of king Josiah (reigned 640-609 BCE), but the book was not completed until after the fall of Jerusalem to the Neo-Babylonian Empire in 586 BCE, and possibly not until after the return from the Babylonian exile in 539 BCE.