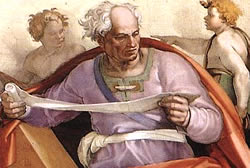 The Book of Joel is part of the Hebrew Bible and Christian Old Testament, one of twelve prophetic books known as the Twelve Minor Prophets. (The term indicates the short length of the text in relation to longer prophetic texts known as the Major Prophets.)

After a superscription ascribing the prophecy to Joel (son of Pethuel), the book may be broken down into the following sections: