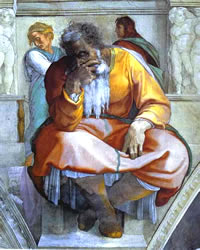 The Book of Jeremiah is the second of the Latter Prophets in the Hebrew Bible, and the second of the Prophets in the Christian Old Testament. The superscription at chapter Jeremiah 1:1-3 identifies the book as "the words of Jeremiah son of Hilkiah". Of all the prophets, Jeremiah comes through most clearly as a person, ruminating to his scribe Baruch about his role as a servant of God with little good news for his audience. His book is intended as a message to the Jews in exile in Babylon, explaining the disaster of exile as God's response to Israel's pagan worship: the people, says Jeremiah, are like an unfaithful wife and rebellious children, their infidelity and rebelliousness made judgment inevitable, although restoration and a new covenant are foreshadowed. Authentic oracles of Jeremiah are probably to be found in the poetic sections of chapters 1-25, but the book as a whole has been heavily edited and added to by the prophet's followers (including perhaps his companion, the scribe Baruch) and later generations of Deuteronomists. It has come down in two distinct though related versions, one in Hebrew, the other known from a Greek translation. The date of the two (Greek and Hebrew) can be suggested by the fact that the Greek shows concerns typical of the early Persian period, while the Masoretic (i.e., Hebrew) shows perspectives which, although known in the Persian period, did not reach their realisation until the 2nd century BCE.

It is difficult to discern any structure in Jeremiah, probably because the book had such a long and complex composition history. It can be divided into roughly six sections: