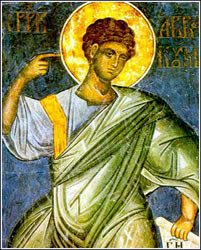 The Book of Habakkuk is the eighth book of the 12 minor prophets of the Bible. It is attributed to the prophet Habakkuk, and was probably composed in the late 7th century BC.

Of the three chapters in the book, the first two are a dialog between Yahweh and the prophet. The message that "the just shall live by his faith" (2:4) plays an important role in Christian thought. It is used in the Epistle to the Romans, Epistle to the Galatians, and the Epistle to the Hebrews as the starting point of the concept of faith. A copy of these chapters is included in the Habakkuk Commentary, found among the Dead Sea Scrolls. Chapter 3 may be an independent addition, now recognized as a liturgical piece, but was possibly written by the same author as chapters 1 and 2.

The prophet Habakkuk is generally believed to have written his book in the mid-to-late 7th century BC, not long before the Babylonians' siege and capture of Jerusalem in 586 BC.

Habakkuk identifies himself as a prophet in the opening verse. Due to the liturgical nature of the book of Habakkuk, there have been some scholars who think that the author may have been a temple prophet. Temple prophets are described in 1 Chronicles 25:1 as using lyres, harps and cymbals. Some feel that this is echoed in Habakkuk 3:19b, and that Habakkuk may have been a Levite and singer in the Temple.

There is no biographical information on the prophet Habakkuk; in fact less is known about him than any other writer of the Bible. The only canonical information that exists comes from the book that is named for him. His name comes either from the Hebrew word (khavak) meaning "embrace" or else from an Akkadian word hambakuku for a kind of plant.

Although his name does not appear in any other part of the Jewish Bible, Rabbinic tradition holds Habakkuk to be the Shunammite woman's son, who was restored to life by Elisha in 2 Kings 4:16. The prophet Habakkuk is also mentioned in the narrative of Bel and the Dragon, part of the deuterocanonical additions to Daniel in a late section of that book. In the superscription of the Old Greek version, Habakkuk is called the son of Joshua of the tribe of Levi. In this book Habakkuk is lifted by an angel to Babylon to provide Daniel with some food while he is in the lion's den.

It is unknown when Habakkuk lived and preached, but the reference to the rise and advance of the Chaldeans in 1:6-11 places him in the middle to last quarter of the 7th century BC. One possible period might be during the reign of Jehoiakim, from 609-598 BC. The reasoning for this date is that it is during his reign that the Neo-Babylonian Empire of the Chaldeans was growing in power. The Babylonians marched against Jerusalem in 598 BC. Jehoiakim died while the Babylonians were marching towards Jerusalem and Jehoiakim's eighteen year-old son Jehoiachin assumed the throne. Upon the Babylonians' arrival, Jehoiachin and his advisors surrendered Jerusalem after a short time. With the transition of rulers and the young age and inexperience of Jehoiachin, they were not able to stand against Chaldean forces. There is a sense of an intimate knowledge of the Babylonian brutality in 1:12-17.