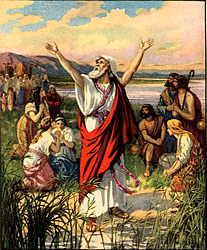 The Book of Ezra is a book of the Hebrew Bible; which formerly included the Book of Nehemiah in a single book, commonly distinguished in scholarship as Ezra-Nehemiah. The two became separated with the first printed rabbinic bibles of the early 16th century, following late medieval Latin Christian tradition. Composed in Hebrew and Aramaic, its subject is the Return to Zion following the close of the Babylonian captivity, and it is divided into two parts, the first telling the story of the first return of exiles in the first year of Cyrus the Great (538 BC) and the completion and dedication of the new Temple in Jerusalem in the sixth year of Darius I (515 BC), the second telling of the subsequent mission of Ezra to Jerusalem and his struggle to purify the Jews from marriage with non-Jews. Together with the Book of Nehemiah, it represents the final chapter in the historical narrative of the Hebrew Bible.

Ezra is written to fit a schematic pattern in which the God of Israel inspires a king of Persia to commission a leader from the Jewish community to carry out a mission; three successive leaders carry out three such missions, the first rebuilding the Temple, the second purifying the Jewish community, and the third sealing the holy city itself behind a wall. (This last mission, that of Nehemiah, is not part of the Book of Ezra.) The theological program of the book explains the many problems its chronological structure presents. It probably appeared in its earliest version around 399 BC, and continued to be revised and edited for several centuries before being accepted as scriptural in the early Christian era.