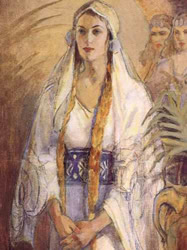 The Book of Esther, also known in Hebrew as "the Scroll" (Megillah), is a book in the third section (Ketuvim, "Writings") of the Jewish Tanakh (the Hebrew Bible) and in the Christian Old Testament. It is one of the five Scrolls (Megillot) in the Hebrew Bible. It relates the story of a Hebrew woman in Persia, born as Hadassah but known as Esther, who becomes queen of Persia and thwarts a genocide of her people. The story forms the core of the Jewish festival of Purim, during which it is read aloud twice: once in the evening and again the following morning. The books of Esther and Song of Songs are the only books in the Hebrew Bible that do not mention God.

The biblical Book of Esther is set in the Persian capital of Susa (Shushan) in the third year of the reign of the Persian king Ahasuerus. The name Ahasuerus is equivalent to Xerxes (both deriving from the Persian Khshayarsha), and Ahasuerus is usually identified in modern sources as Xerxes I, who ruled between 486 and 465 BC, as it is to this monarch that the events described in Esther are thought to fit the most closely.

Assuming that Ahasuerus is indeed Xerxes I, the events described in Esther began around the years 483-82 BC, and concluded in March 473 BC.

Classical sources such as Josephus, the Jewish commentary Esther Rabbah and the Christian theologian Bar-Hebraeus, as well as the Greek Septuagint translation of Esther, instead identify Ahasuerus as either Artaxerxes I (reigned 465 to 424 BC) or Artaxerxes II (reigned 404 to 358 BC).

On his accession, however, Artaxerxes II lost Egypt to pharaoh Amyrtaeus, after which it was no longer part of the Persian empire. In his Historia Scholastica Petrus Comestor identified Ahasuerus (Esther 1:1) as Artaxerxes III (358-38 BC) who reconquered Egypt.

The plot is structured around banquets (mishteh), a word that occurs twenty times in Esther and only 24 times in the rest of the Hebrew bible. This is appropriate given that Esther describes the origin of a Jewish feast, the feast of Purim, but Purim itself is not the subject and no individual feast in the book is commemorated by Purim. The book's theme, rather, is the reversal of destiny through a sudden and unexpected turn of events: the Jews seem destined to be destroyed, but instead are saved. In literary criticism such a reversal is termed "peripety", and while on one level its use in Esther is simply a literary or aesthetic device, on another it is structural to the author's theme, suggesting that the power of God is at work behind human events.