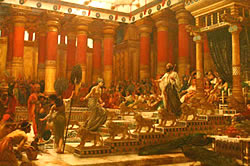 Ecclesiastes written c. 450-200 BCE, is one of the "Wisdom" books of the Old Testament. The title is a Latin transliteration of the Greek translation of the Hebrew word Kohelet (also written as Koheleth, Qoheleth or Qohelet). The unnamed author introduces "Kohelet" as the son of David (1:1); he does not use his own voice again until the final verses (12:9-14), where he gives his own thoughts and summarises the statements of "Kohelet".

Kohelet proclaims that all human actions are hevel, "vapor" or "breath", meaning "insubstantial", "vain", or "futile", since the lives of both wise and foolish people all end in death. While Kohelet clearly endorses wisdom as a means for a well-lived earthly life, he is unable to ascribe eternal meaning to it. In light of this perceived senselessness, he suggests that human beings should enjoy the simple pleasures of daily life, such as eating, drinking, and taking enjoyment in one's work, which are gifts from the hand of God. The book concludes with the injunction to "Fear God, and keep his commandments; for that is the whole duty of everyone", but the Oxford Bible Commentary notes that this "lends the saying an orthodox tone which is quite absent in the monologue."