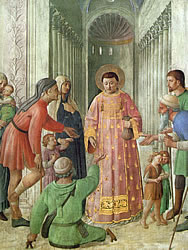 The Book of Kings is the ninth book of the Hebrew Bible or the eleventh and twelfth books of the Christian Old Testament. It concludes the Deuteronomistic history, a history of Israel also comprising the books of Joshua and Judges and the Book of Samuel, which biblical commentators believe was written to provide a theological explanation for the destruction of the Kingdom of Judah by Babylon in c. 586 BCE and a foundation for a return from exile. The two books of Kings present a history of ancient Israel and Judah from the death of King David to the release of Jehoiachin from imprisonment in Babylon, a period of some 400 years (c. 960 - c. 560 BCE). Scholars tend to treat the books as made up of a first edition from the late 7th century BCE and a second and final edition from the mid-6th century BCE.

The Jerusalem Bible divides the two books of Kings into eight sections:

In David's old age, Adonijah proclaims himself his successor but Solomon's supporters arrange for David to proclaim Solomon as his successor, and so he comes to the throne after David's death. At the beginning of his reign he assumes God's promises to David and brings splendour to Israel and peace and prosperity to his people. The centrepiece of Solomon's reign is the building of the First Temple: the claim that this took place 480 years after the Exodus from Egypt marks it as a key event in Israel's history. At the end, however, he follows other gods and oppresses Israel.

As a consequence of Solomon's failure to stamp out the worship of gods other than Yahweh, the kingdom of David is split in two in the reign of his own son Rehoboam, who becomes the first to reign over the kingdom of Judah. The kings who follow Rehoboam in Jerusalem continue the royal line of David (i.e., they inherit the promise to David); in the north, however, dynasties follow each other in rapid succession, and the kings are uniformly bad (meaning that they fail to follow Yahweh alone). At length God brings the Assyrians to destroy the northern kingdom, leaving Judah as the sole custodian of the promise.

Hezekiah, the 14th king of Judah, does "what (is) right in the Lord's sight just as his ancestor David had done" and institutes a far reaching religious reform, centralising sacrifice at the temple at Jerusalem and destroying the images of other gods. Yahweh saves Jerusalem and the kingdom from an invasion by Assyria. But Manasseh, the next king, reverses the reforms, and God announces that he will destroy Jerusalem because of this apostasy by the king. Manasseh's righteous grandson Josiah reinstitutes the reforms of Hezekiah, but it is too late: God, speaking through the prophetess Huldah, affirms that Jerusalem is to be destroyed after the death of Josiah.

In the final chapters, God brings the Neo-Babylonian Empire of King Nebuchadnezzar against Jerusalem; Yahweh withholds aid from his people; Jerusalem is razed and the Temple destroyed; and the priests, prophets and royal court are led into captivity. The final verses record how Jehoiachin, the last king, is set free and given honour by the king of Babylon.