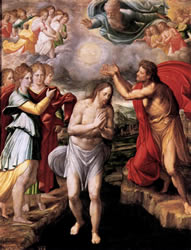 The Epistle to the Romans or Letter to the Romans, often shortened to Romans, is the sixth book in the New Testament. Biblical scholars agree that it was composed by Paul the Apostle to explain that salvation is offered through the gospel of Jesus Christ. It is the longest of the Pauline epistles.

The scholarly consensus is that Paul wrote the Epistle to the Romans. The letter was most probably written while Paul was in Corinth, probably while he was staying in the house of Gaius, and transcribed by Tertius, his amanuensis. There are a number of reasons why Corinth is considered most plausible. Paul was about to travel to Jerusalem on writing the letter, which matches Acts where it is reported that Paul stayed for three months in Greece. This probably implies Corinth as it was the location of Paul's greatest missionary success in Greece. Additionally, Phoebe was a deacon of the church in Cenchreae, a port to the east of Corinth, and would have been able to convey the letter to Rome after passing through Corinth and taking a ship from Corinth's west port. Erastus, mentioned in Romans 16:23, also lived in Corinth, being the city's commissioner for public works and city treasurer at various times, again indicating that the letter was written in Corinth.

The precise time at which it was written is not mentioned in the epistle, but it was obviously written when the collection for Jerusalem had been assembled and Paul was about to "go unto Jerusalem to minister unto the saints", that is, at the close of his second visit to Greece, during the winter preceding his last visit to that city. The majority of scholars writing on Romans propose the letter was written in late 55/early 56 or late 56/early 57. Early 55 and early 58 both have some support.