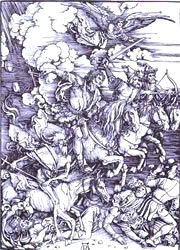 The Book of Revelation (also called the Apocalypse of John, Revelation to John or Revelation from Jesus Christ) is the final book of the New Testament, and consequently is also the final book of the Christian Bible. Its title is derived from the first word of the Koine Greek text: apokalypsis, meaning "unveiling" or "revelation." The Book of Revelation is the only apocalyptic book in the New Testament canon. Thus, it occupies a central place in Christian eschatology.

The author names himself as "John" in the text, but his precise identity remains a point of academic debate. Second-century Christian writers such as Justin Martyr, Irenaeus, Melito (the bishop of Sardis), Clement of Alexandria, and the author of the Muratorian fragment identify John the Apostle as the "John" of Revelation. Modern scholarship generally takes a different view, with many considering that nothing can be known about the author except that he was a Christian prophet. Some modern scholars characterize Revelation's author as a putative figure whom they call "John of Patmos". The bulk of traditional sources date the book to the reign of the Roman emperor Domitian (AD 81-96), which evidence tends to confirm.

The book spans three literary genres: the epistolary, the apocalyptic, and the prophetic. It begins with John, on the island of Patmos in the Aegean Sea, addressing a letter to the "Seven Churches of Asia". He then describes a series of prophetic visions, including figures such as the Seven-Headed Dragon, the Serpent, and the Beast, which culminate in the Second Coming of Jesus.

The obscure and extravagant imagery has led to a wide variety of Christian interpretations. Historicist interpretations see Revelation as containing a broad view of history, whilst preterist interpretations treat Revelation as mostly referring to the events of the Apostolic Age (1st century), or, at the latest, the fall of the Roman Empire. Futurists, meanwhile, believe that Revelation describes future events, with the seven churches growing into the body/believers throughout the age, and a reemergence or continuous rule of a Roman/Graeco system with modern capabilities described by John in ways familiar to him, and idealist or symbolic interpretations consider that Revelation does not refer to actual people or events, but is an allegory of the spiritual path and the ongoing struggle between good and evil.