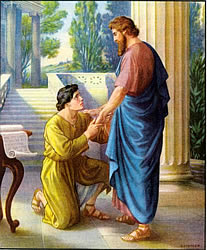 The Epistle of Paul to Philemon, known simply as Philemon, is one of the books of the Christian New Testament. It is a prison letter, co-authored by Paul the Apostle with Timothy, to Philemon, a leader in the Colossian church. It deals with the themes of forgiveness and reconciliation. Paul does not identify himself as an apostle with authority, but as "a prisoner of Jesus Christ", calling Timothy "our brother", and addressing Philemon as "fellow labourer" and "brother." (Philemon 1:1; 1:7; 1:20) Onesimus, a slave that had departed from his master Philemon, was returning with this epistle wherein Paul asked Philemon to receive him as a "brother beloved."(Philemon 1:9-17)

Philemon was a wealthy Christian, possibly a bishop of the house church that met in his home (Philemon 1:1-2) in Colossae. This letter is now generally regarded as one of the undisputed works of Paul. It is the shortest of Paul's extant letters, consisting of only 335 words in the Greek text.

The Epistle to Philemon was composed around 57-59 A.D by Paul while in prison at Caesarea Maritima.

The epistle of Philemon is attributed to the apostle Paul, and this attribution has rarely been questioned by scholars. Along with six others, it is numbered among the "undisputed letters", which are widely considered to be authentically Pauline.

The opening verse of the salutation also names Timothy alongside Paul. This, however, does not mean that Timothy was the epistle's co-author. Rather, Paul regularly mentions others in the address if they have a particular connection with the recipient. In this case, Timothy may have encountered Philemon while accompanying Paul in his work in Ephesus.

According to the majority interpretation, Paul wrote this letter on behalf of Onesimus, a runaway slave who had wronged his owner Philemon. The details of the offence are unstated, although it is often assumed that Onesimus had fled after stealing money, as Paul states in verse 18 that if Onesimus owes anything, Philemon should charge this to Paul's account. Sometime after leaving, Onesimus came into contact with Paul, although again the details are unclear. He may have been arrested and imprisoned alongside Paul. Alternatively, he may have previously heard Paul's name (as his owner was a Christian) and so travelled to him for help. After meeting Paul, Onesimus became a Christian believer. An affection grew between them, and Paul would have been glad to keep Onesimus with him. However, he considered it better to send him back to Philemon with an accompanying letter, which aimed to effect reconciliation between them as Christian brothers. The preservation of the letter suggests that Paul's request was granted.

The only extant information about Onesimus apart from this letter is found in Paul's epistle to the Colossians 4:7-9, where Onesimus is called "a faithful and beloved brother":

All my state shall Tychicus declare unto you, who is a beloved brother, and a faithful minister and fellow servant in the Lord: 8 Whom I have sent unto you for the same purpose, that he might know your estate, and comfort your hearts; 9 With Onesimus, a faithful and beloved brother, who is one of you. They shall make known unto you all things which are done here.

The letter is addressed to Philemon, Apphia and Archippus, and the church in Philemon's house. Philemon is described as a "fellow worker" of Paul. It is generally assumed that he lived in Colossae; in the letter to the Colossians, Onesimus (the slave who fled from Philemon) and Archippus (whom Paul greets in the letter to Philemon) are described as members of the church there. Philemon may have converted to Christianity through Paul's ministry, possibly in Ephesus. Apphia in the salutation is probably Philemon's wife. Some have speculated that Archippus, described by Paul as a "fellow soldier", is the son of Philemon and Apphia.

View the Chapters of Philemon:
1