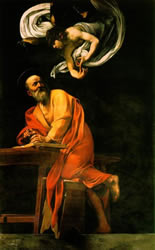 The Gospel according to Matthew, also called the Gospel of Matthew, or simply Matthew, is the first book of the New Testament and one of the three synoptic Gospels. It tells how Israel's Messiah, rejected and executed in Israel, pronounces judgement on Israel and its leaders and becomes the salvation of the gentiles. The gospel reflects the struggles and conflicts between the evangelist's community and the other Jews, particularly with its sharp criticism of the scribes and Pharisees: before the Crucifixion they are referred to as Israelites, the honorific title of God's chosen people; after it, they are called simply Ioudaioi ("Jews"), a sign that through their rejection of the Christ the "Kingdom of Heaven" has been taken away from them and given instead to the church.

The divine nature of Jesus was a major issue for the Matthaean community, the crucial element separating the early Christians from their Jewish neighbors; while Mark begins with Jesus' baptism and temptations, Matthew goes back to Jesus' origins, showing him as the Son of God from his birth, the fulfillment of messianic prophecies of the Old Testament. The title Son of David identifies Jesus as the healing and miracle-working Messiah of Israel (it is used exclusively in relation to miracles), sent to Israel alone. As Son of Man he will return to judge the world, an expectation which his disciples recognise but of which his enemies are unaware. As Son of God, God is revealing himself through his son, and Jesus proving his sonship through his obedience and example.

Most scholars believe the gospel was composed between AD 80 and 90, with a range of possibility between AD 70 to 110; a pre-70 date remains a minority view. The work does not identify its author, and the early tradition attributing it to the apostle Matthew is rejected by modern scholars. He was probably a male Jew, standing on the margin between traditional and non-traditional Jewish values, and familiar with technical legal aspects of scripture being debated in his time. Writing in a polished Semitic "synagogue Greek", he drew on the Gospel of Mark as a source, plus the hypothetical collection of sayings known as the Q source (material shared with Luke but not with Mark) and material unique to his own community, called the M source or "Special Matthew".