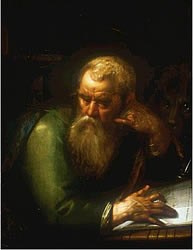 The Gospel according to Mark, also called the Gospel of Mark, or simply Mark, is the second of the four canonical gospels and of the three synoptic gospels. It tells of the ministry of Jesus from his baptism by John the Baptist to his death and burial and the discovery of Jesus' empty tomb. There is no miraculous birth or doctrine of divine pre-existence, nor, in the original ending (Mark 16:1-8), any post-resurrection appearances of Jesus. It portrays Jesus as a heroic man of action, an exorcist, a healer, and a miracle worker. He is also the Son of God, but keeps his messianic nature secret, with even his disciples failing to understand him. All this is in keeping with prophecy, which foretold the fate of the messiah as suffering servant. The gospel ends, in its original version, with the discovery of the empty tomb, a promise to meet again in Galilee, and an unheeded instruction to spread the good news of the resurrection.

Most scholars date Mark to closely after AD 70. They reject the traditional ascription to Mark the Evangelist, the companion of the Apostle Peter, which probably arose from the desire of early Christians to link the work to an authoritative figure, and believe it to be the work of an author working with various sources including collections of miracle stories, controversy stories, parables, and a passion narrative. It was traditionally placed second, and sometimes fourth, in the Christian canon, as an inferior abridgement of what was regarded as the most important gospel, Matthew. The Church has consequently derived its view of Jesus primarily from Matthew, secondarily from John, and only distantly from Mark. It was only in the 19th century that Mark came to be seen as the earliest of the four gospels, and as a source used by both Matthew and Luke. The hypothesis of Marcan priority (that Mark was written first) continues to be held by the majority of scholars today, and there is a new recognition of the author as an artist and theologian using a range of literary devices to convey his conception of Jesus as the authoritative yet suffering Son of God.