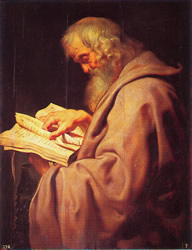 The Epistle of Jude, often shortened to Jude, is the penultimate book of the New Testament and the Bible as a whole and is traditionally attributed to Jude, the servant of Jesus and the brother of James the Just.

The letter of Jude was one of the disputed books of the biblical canon. The links between the Epistle and 2 Peter, its use of the biblical apocrypha, and its brevity raised concern. It is one of the shortest books in the Bible: only 1 chapter of 25 verses long.

Jude urges his readers to defend the deposit of Christ's doctrine that had been closed by the time he wrote his epistle, and to remember the words of the apostles spoken somewhat before. Jude then asks the reader to recall how even after the Lord saved his own people out of the land of Egypt, he did not hesitate to destroy those who fell into unbelief, much as he punished the angels who fell from their original exalted status and Sodom and Gomorrah. He describes in vivid terms the apostates of his day. He exhorts believers to remember the words spoken by the Apostles, using language similar to the second epistle of Peter to answer concerns that the Lord seemed to tarry, How that they told you there should be mockers in the last time, who should walk after their own ungodly lusts..., and to keep themselves in God's love, before delivering a doxology.

Jude quotes directly from the Book of Enoch, part of the scripture of the Ethiopian and Eritrean churches but rejected by other churches. He cites Enoch's prophecy that the Lord would come with many thousands of his saints to render judgment on the whole world. He also paraphrases (verse 9) an incident in a text that has been lost about Satan and Michael the Archangel quarreling over the body of Moses.

View the Chapters of Jude:
1