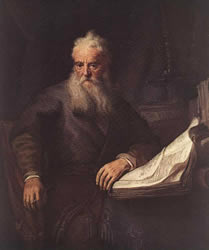 The text does not mention the name of its author, but was traditionally attributed to Paul the Apostle. However, doubt on Pauline authorship in the Roman Church is reported by Eusebius. Modern biblical scholarship considers its authorship unknown, perhaps written in deliberate imitation of the style of Paul. Although the writer's style reflects some characteristics of Paul's writing, there are some differences.

Scholars of Greek consider its writing to be more polished and eloquent than any other book of the New Testament, and "the very carefully composed and studied Greek of Hebrews is not Paul's spontaneous, volatile contextual Greek". The book has earned the reputation of being a masterpiece. It has also been described as an intricate New Testament book. Some scholars believe it was written for Jewish Christians who lived in Jerusalem. Its purpose was to exhort Christians to persevere in the face of persecution. At this time, certain believers were considering turning back to Judaism (the Jewish system of law) to escape being persecuted for accepting Christ as their saviour, now following this system of grace (saved by Jesus' sacrifice on the cross). The theme of the epistle is the doctrine of the person of Christ and his role as mediator between God and humanity.

According to traditional scholarship, the author of the Epistle to the Hebrews, following in the footsteps of Paul, argued that Jewish Law, the cornerstone of the beliefs and traditions of the descendants of the founding fathers, had played a legitimate role in the past but was superseded by a new covenant that applies to Gentiles (cf. Rom. 7:1-6; Gal. 3:23-25; Heb. 8, 10). However, a growing number of scholars point that the terms Gentile, Christian and Christianity are not present in the text and posit that Hebrews was written for a Jewish audience, and is best seen as a debate between Jewish followers of Jesus and mainstream Judaism. In tone, and detail, Hebrews goes beyond Paul and attempts a more complex, nuanced, and openly adversarial definition of the relationship. The epistle opens with an exaltation of Jesus as "the radiance of God's glory, the express image of his being, and upholding all things by his powerful word". The epistle presents Jesus with the titles "pioneer" or "forerunner", "Son" and "Son of God", "priest" and "high priest". The epistle casts Jesus as both exalted Son and high priest, a unique dual Christology.