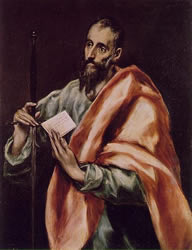 The Epistle to the Galatians, often shortened to Galatians, is the ninth book of the New Testament. It is a letter from Paul the Apostle to a number of Early Christian communities in Galatia. Scholars have suggested that this is either the Roman province of Galatia in southern Anatolia, or a large region defined by an ethnic group of Celtic people in central Anatolia.

Paul is principally concerned with the controversy surrounding gentile Christians and the Mosaic Law during the Apostolic Age. Paul argues that the gentile Galatians do not need to adhere to the tenets of the Mosaic Law, particularly religious male circumcision, by contextualizing the role of the law in light of the revelation of Christ. The Epistle to the Galatians has exerted enormous influence on the history of Christianity, the development of Christian theology, and the study of the Apostle Paul.

The central dispute in the letter concerns the question of how Gentiles could convert to Christianity, which shows that this letter was written at a very early stage in church history, when the vast majority of Christians were Jewish or Jewish proselytes, which historians refer to as the Jewish Christians. Another indicator that the letter is early is that there is no hint in the letter of a developed organization within the Christian community at large. This puts it during the lifetime of Paul himself.

As with all the Bible, the original of the letter (autograph) is not known to survive. Papyrus 46, the earliest reasonably complete version available to scholars today, dates to approximately AD 200, approximately 150 years after the original was presumably drafted. This papyrus is fragmented in a few areas, causing some of the original text to be missing, "however, through careful research relating to paper construction, handwriting development, and the established principles of textual criticism, scholars can be rather certain about where these errors and changes appeared and what the original text probably said."

In the past, a small number of scholars have questioned Paul's authorship of Galatians. Currently, Biblical scholars agree that Galatians is a true example of Paul's writing. The main arguments in favor of the authenticity of Galatians include its style and themes, which are common to the core letters of the Pauline corpus. Moreover, Paul's possible description of the Council of Jerusalem (Gal.2:1-10) gives a different point of view from the description in Acts 15:2-29, if it is, in fact, describing the Jerusalem Council.

A majority of scholars agree that Galatians was written between the late 40s and early 50s, although some date the original composition to c. 50-60. Jon Jordan notes that an interesting point to be made in the search for the dating of Galatians concerns whether or not it is a response to the Council of Jerusalem or a factor leading up to the Council. He writes, "did Paul's argument in Galatians flow out of the Jerusalem Council's decision, or did it come before the Jerusalem Council and possibly help shape that very decision?"

Paul's letter is addressed "to the churches of Galatia" (Galatians 1:2), but the location of these churches is a matter of debate. Most scholars agree that it is a geographical reference to the Roman province in central Asia Minor, which had been settled by immigrant Celts in the 270s BC and retained Gaulish features of culture and language in Paul's day. Acts of the Apostles records Paul traveling to the "region of Galatia and Phrygia", which lies immediately west of Galatia. A minority of scholars have argued that the "Galatia" is an ethnic reference to a Celtic people living in northern Asia Minor.

Some claim the New Testament says that the churches of Galatia (Antioch of Pisidia, Iconium, Lystra and Derbe) were founded by Paul himself (Acts 16:6; Galatians.1:6; 4:13; 4:19). They seem to have been composed mainly of gentile converts (Galatians 4:8). After Paul's departure, the churches were led astray from Paul's trust/faith-centered teachings by individuals proposing "another gospel" (which centered on salvation through the Mosaic law, so-called legalism), whom Paul saw as preaching a "different gospel" from what Paul had taught (Galatians 1:1-9). The Galatians appear to have been receptive to the teaching of these newcomers, and the epistle is Paul's response to what he sees as their willingness to turn from his teaching.

The identity of these "opponents" is disputed. However, the majority of modern scholars view them as Jewish Christians, who taught that in order for converts to belong to the People of God, they must be subject to some or all of the Jewish Law, (i.e. Judaizers). The letter indicates controversy concerning circumcision, Sabbath observance, and the Mosaic Covenant. It would appear, from Paul's response, that they cited the example of Abraham, who was circumcised as a mark of receiving the covenant blessings (Genesis 17). They certainly appear to have questioned Paul's authority as an apostle, perhaps appealing to the greater authority of the Jerusalem church governed by James (brother of Jesus).

The North Galatian view holds that the epistle was written very soon after Paul's second visit to Galatia (Acts 18:23). In this view, the visit to Jerusalem, mentioned in Galatians 2:1-10, is identical with that of Acts 15, which is spoken of as a thing of the past. Consequently, the epistle seems to have been written after the Council of Jerusalem. The similarity between this epistle and the epistle to the Romans has led to the conclusion that they were both written at roughly the same time, during Paul's stay in Macedonia in roughly 56-57.

This third date takes the word "quickly" in Gal. 1:6 literally.

The South Galatian view holds that Paul wrote Galatians before the First Jerusalem Council, probably on his way to it, and that it was written to churches he had presumably planted during either his time in Tarsus (he would have traveled a short distance, since Tarsus is in Cilicia) after his first visit to Jerusalem as a Christian, or during his first missionary journey, when he traveled throughout southern Galatia. If it was written to the believers in South Galatia, it would likely have been written in 49.

A third theory is that Galatians 2:1-10 describes Paul and Barnabas' visit to Jerusalem described in Acts 11:30 and 12:25. This theory holds that the epistle was written before the Council was convened, possibly making it the earliest of Paul's epistles. According to this theory, the revelation mentioned (Gal 2:2) corresponds with the prophecy of Agabus (Acts 11:27-28). This view holds that the private speaking about the gospel shared among the Gentiles precludes the Acts 15 visit, but fits perfectly with Acts 11. It further holds that continuing to remember the poor (Gal. 2:10) fits with the purpose of the Acts 11 visit, but not Acts 15.

In addition, the exclusion of any mention of the letter of Acts 15 is seen to indicate that such a letter did not yet exist, since Paul would have been likely to use it against the legalism confronted in Galatians. Finally, this view doubts Paul's confrontation of Peter (Gal. 2:11) would have been necessary after the events described in Acts 15. If this view is correct, the epistle should be dated somewhere around 47, depending on other difficult to date events, such as Paul's conversion.

Scholars have debated whether we can or should attempt to reconstruct both the backgrounds and arguments of the opponents to which Paul would have been responding. Though these opponents have traditionally been designated as Judaizers, this classification has fallen out of favor in contemporary scholarship. Some instead refer to them instead as Agitators. While many scholars have claimed that Paul's opponents were circumcisionist Jewish followers of Jesus, the ability to make such determinations with a reasonable degree of certainty has been called into question. It has often been presumed that they traveled from Jerusalem, but some commentators have raised the question of whether they may have actually been insiders familiar with the dynamics of the community. Furthermore, some commentaries and articles pointed out the inherent problems in mirror-reading, emphasizing that we simply do not have the evidence necessary to reconstruct the arguments of Paul's opponents. It is not sufficient to simply reverse his denials and assertions. This does not result in a coherent argument nor can it possibly reflect the thought processes of his opponents accurately. It is nearly impossible to reconstruct the opponents from Paul's text because their representation is necessarily polemical. All we can say with certainty is that they supported a different position of gentile relations with Jewish folk than Paul did.