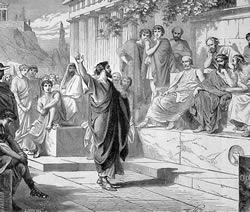 The Epistle of Paul to the Colossians (or simply Colossians) is the twelfth book of the New Testament. It was written, according to the text, by Paul the Apostle and Timothy to the Church in Colossae, a small Phrygian city near Laodicea and approximately 100 miles (160 km) from Ephesus in Asia Minor.

Scholars have increasingly questioned Paul's authorship and attributed the letter to an early follower instead. The authenticity of the letter, however, has been defended with equal strength. If Paul was the author, he probably used an amanuensis, or secretary, in writing the letter (Col 4:18), possibly Timothy.

During the first generation after Jesus, Paul's epistles to various churches helped establish early Christian theology. Scholars believe it was written in the 50s while Paul was in prison. Colossians is similar to Ephesians, also written at this time. Some critical scholars have ascribed the epistle to an early follower of Paul, writing as Paul. The epistle's description of Christ as pre-eminent over creation marks it, for some scholars, as representing an advanced christology not present during Paul's lifetime. Defenders of Pauline authorship cite the work's similarities to the letter to Philemon, which is broadly accepted as authentic.

The letter may have been written by Paul at Rome during his first imprisonment. Other scholars have suggested that it was written from Caesarea or Ephesus. If the letter is not considered to be an authentic part of the Pauline corpus, then it might be dated during the late 1st century, possibly as late as AD 90.

The letter's authors claim to be Paul and Timothy, but authorship began to be authoritatively questioned during the 19th century. Pauline authorship was held to by many of the early church's prominent theologians, such as Irenaeus, Clement of Alexandria, Tertullian, Origen of Alexandria and Eusebius.

Advocates of Pauline authorship defend the differences that there are between elements in this letter and those commonly considered the genuine work of Paul (e.g. 1 Thessalonians). It is argued that these differences can come by human variability, such as by growth in theological knowledge over time, different occasion for writing, as well as use of different secretaries (or amanuenses) in composition. As it is usually pointed out by the same authors who note the differences in language and style, the number of words foreign to the New Testament and Paul is no greater in Colossians than in the undisputed Pauline letters (Galatians, of similar length, has 35 hapax legomena). In regard to the style, as Norman Perrin, who argues for pseudonymity, notes, "The letter does employ a great deal of traditional material and it can be argued that this accounts for the non-Pauline language and style. If this is the case, the non-Pauline language and style are not indications of pseudonymity." Not only that, but it has been noted that Colossians has indisputably Pauline stylistic characteristics, found nowhere else in the New Testament. Advocates of Pauline authorship also argue that the differences between Colossians and the rest of the New Testament are not as great as they are purported to be.