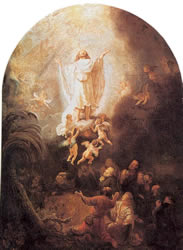 The Acts of the Apostles, often referred to simply as Acts, or formally the Book of Acts, is the fifth book of the New Testament; it tells of the founding of the Christian church and the spread of its message to the Roman Empire.

Acts and the Gospel of Luke make up a two-part work, Luke-Acts, by the same anonymous author, usually dated to around 80-90 AD, although some experts now suggest 90-110. The first part, the Gospel of Luke, tells how God fulfilled his plan for the world's salvation through the life, death, and resurrection of Jesus of Nazareth, the promised Messiah. Acts continues the story of Christianity in the 1st century, beginning with the ascension of Jesus to Heaven. The early chapters, set in Jerusalem, describe the Day of Pentecost (the coming of the Holy Spirit) and the growth of the church in Jerusalem. Initially, the Jews are receptive to the Christian message, but later they turn against the followers of Jesus. Rejected by the Jews, the message is taken to the Gentiles under the guidance of the Apostle Peter. The later chapters tell of Paul's conversion, his mission in Asia Minor and the Aegean, and finally his imprisonment in Rome, where, as the book ends, he awaits trial.

Luke-Acts is an attempt to answer a theological problem, namely how the Messiah of the Jews came to have an overwhelmingly non-Jewish church; the answer it provides is that the message of Christ was sent to the Gentiles because the Jews rejected it. Luke-Acts can also be seen as a defense of (or "apology" for) the Jesus movement addressed to the Jews: the bulk of the speeches and sermons in Acts are addressed to Jewish audiences, with the Romans serving as external arbiters on disputes concerning Jewish customs and law. On the one hand, Luke portrays the followers of Jesus as a sect of the Jews, and therefore entitled to legal protection as a recognised religion; on the other, Luke seems unclear as to the future God intends for Jews and Christians, celebrating the Jewishness of Jesus and his immediate followers while also stressing how the Jews had rejected God's promised Messiah.