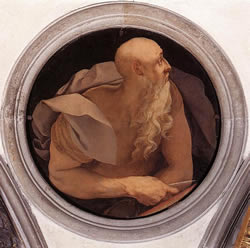 The Third Epistle of John, often referred to as Third John and written 3 John or III John, is the third-to-last book of the New Testament and the Christian Bible as a whole, and attributed to John the Evangelist, traditionally thought to be the author of the Gospel of John and the other two epistles of John. The Third Epistle of John is a private letter composed to a man named Gaius, recommending to him a group of Christians led by Demetrius, which had come to preach the gospel in the area where Gaius lived. The purpose of the letter is to encourage and strengthen Gaius, and to warn him against Diotrephes, who refuses to cooperate with the author of the letter.

Early church literature contains no mention of the epistle, with the first reference to it appearing in the middle of the third century. This lack of documentation, though likely due to the extreme brevity of the epistle, caused early church writers to doubt its authenticity until the early 5th century, when it was accepted into the canon along with the other two epistles of John. The language of 3 John echoes that of the Gospel of John, which is conventionally dated to around AD 90, so the epistle was likely written near the end of the first century. Others contest this view, and date 3 John to c. AD 60-65. The location of writing is unknown, but tradition places it in Ephesus. The epistle is found in many of the oldest New Testament manuscripts, and its text is free of major discrepancies or textual variants.

There is no doctrine laid out in 3 John, which is strictly a personal letter, but the overall theme is the importance of hospitality, especially when it comes to men who were working to spread the gospel. Third John is the shortest book of the Bible by word count, though 2 John has fewer verses. It is the only New Testament book which does not contain the names "Jesus" or "Christ."

View the Chapters of 3 John:
1