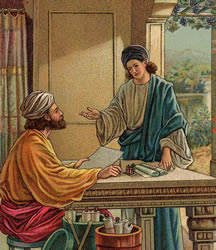 The Second Epistle to the Thessalonians, commonly referred to as Second Thessalonians or 2 Thessalonians is a book from the New Testament of the Christian Bible. It is traditionally attributed to Paul the Apostle, with Timothy as a co-author. Modern biblical scholarship is divided on whether the epistle was written by Paul; Most New Testament scholars believe Paul wrote this epistle but some modern scholars reject its authenticity based on what they see as differences in style and theology between this and the First Epistle to the Thessalonians.

Scholars who support its authenticity view it as having been written around 51-52 AD, shortly after the First Epistle. Those who see it as a later composition assign a date of around 80-115 AD.