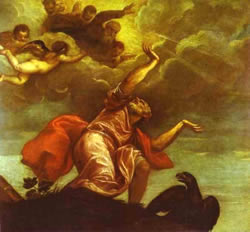 The Second Epistle of John, often referred to as Second John and often written 2 John or II John, is a book of the New Testament attributed to John the Evangelist, traditionally thought to be the author of the other two epistles of John, and the Gospel of John (though this is disputed). Most modern scholars believe this is not John the Apostle, but in general there is no consensus as to the identity of this person or group.

The language of this epistle is remarkably similar to 3 John. It is therefore suggested by a few that a single author composed both of these letters. The traditional view contends that all the letters are by the hand of John the Apostle, and the linguistic structure, special vocabulary, and polemical issues all lend toward this theory.

Also significant is the clear warning against paying heed to those who say that Jesus was not a flesh-and-blood figure: "For many deceivers are entered into the world, who confess not that Jesus Christ is come in the flesh." This establishes that, from the time the epistle was first written, there were those who had docetic Christologies, believing that the human person of Jesus was actually pure spirit or not come at all.

Alternatively, the letter's acknowledgment and rejection of gnostic theology may reveal a later date of authorship than orthodox Christianity claims. This can not be assured by a simple study of the context. Gnosticism's beginnings and its relationship to Christianity are poorly dated, due to an insufficient corpus of literature relating the first interactions between the two religions. It vehemently condemns such anti-corporeal attitudes, which also indicates that those taking such unorthodox positions were either sufficiently vocal, persuasive, or numerous enough to warrant rebuttal in this form. Adherents of gnosticism were most numerous during the second and third centuries.

Thus, in regard to this matter and this document, either one of two explanations is commonly held:

View the Chapters of 2 John:
1