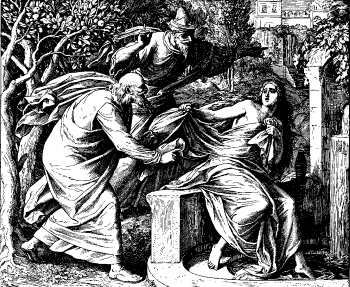 Susanna, also called Susanna and the Elders, is a narrative included in the Book of Daniel (as chapter 13) by the Catholic and Orthodox churches. It is one of the additions to Daniel, considered apocryphal by Protestants. It is listed in Article VI of the 39 Articles of the Church of England among the books which are read "for example of life and instruction of manners", but not for the formation of doctrine. It is not included in the Jewish Tanakh and is not mentioned in early Jewish literature, although the text does appear to have been part of the original Septuagint from the 2nd century BC, and was revised by Theodotion, a Hellenistic Jewish redactor of the Septuagint text (c. 150 AD).

A fair Hebrew wife named Susanna was falsely accused by lecherous voyeurs. As she bathes in her garden, having sent her attendants away, two lustful elders secretly observe the lovely Susanna. When she makes her way back to her house, they accost her, threatening to claim that she was meeting a young man in the garden unless she agrees to have sex with them.

She refuses to be blackmailed and is arrested and about to be put to death for adultery when the young Daniel interrupts the proceedings, shouting that the elders should be questioned to prevent the death of an innocent. After being separated, the two men are cross-examined about details of what they saw but disagree about the tree under which Susanna supposedly met her lover. In the Greek text, the names of the trees cited by the elders form puns with the sentence given by Daniel. The first says they were under a mastic tree, and Daniel says that an angel stands ready to cut him in two. The second says they were under an evergreen oak tree, and Daniel says that an angel stands ready to saw him in two. The great difference in size between a mastic and an oak makes the elders' lie plain to all the observers. The false accusers are put to death, and virtue triumphs.

The Greek puns in the texts have been cited by some as proof that the text never existed in Hebrew or Aramaic, but other researchers have suggested pairs of words for trees and cutting that sound similar enough to suppose that they could have been used in an original. The Anchor Bible uses "yew" and "hew" and "clove" and "cleave" to get this effect in English.

The Greek text survives in two versions. The received version is due to Theodotion; this has superseded the original Septuagint version, which now survives only in Syriac translation, in Papyrus 967 (3rd century), and exceptionally in a single medieval manuscript, known as Codex Chisianus 88.

Sextus Julius Africanus did not regard the story as canonical. Jerome (347-420), while translating the Vulgate, treated this section as a non-canonical fable. In his introduction, he indicated that Susanna was an apocryphal addition because it was not present in the Hebrew text of Daniel. Origen received the story as part of the 'divine books' and censured 'wicked presbyters' who did not recognize its authenticity (Hom Lev 1.3.), remarking that the story was commonly read in the early Church (Letter to Africanus); he also noted the story's absence in the Hebrew text, observing (in Epistola ad Africanum) that it was "hidden" by the Jews in some fashion. Origen's claim is reminiscent of Justin Martyr's charge that Jewish scribes 'removed' certain verses from their Scriptures (Dialogue with Trypho: C.71-3). There are no known early Jewish references to the Susanna story.

View the Chapters of Susanna:
1