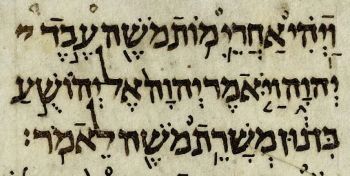 The Prayer of Manasseh is a short work of 15 verses recording a penitential prayer attributed to king Manasseh of Judah. The majority of scholars believe that the Prayer of Manasseh was written in Greek in the first or second century BC. Another work by the same title, written in Hebrew and containing distinctly different content, was found among the Dead Sea Scrolls.

The prayer is considered apocryphal by Jews, Catholics and Protestants. It was placed at the end of 2 Chronicles in the late 4th-century Vulgate. Over a millennium later, Martin Luther included the prayer in his 74-book translation of the Bible into German. It was part of the 1537 Matthew Bible, and the 1599 Geneva Bible. It also appears in the Apocrypha of the King James Bible and of the original 1609/610 Douai-Rheims Bible. Pope Clement VIII included the prayer in an appendix to the Vulgate.

The prayer is included in some editions of the Greek Septuagint. For example, the 5th century Codex Alexandrinus includes the prayer among fourteen Odes appearing just after the Psalms. It is accepted as a deuterocanonical book by Orthodox Christians. The prayer is chanted during the Orthodox Christian and Byzantine Catholic service of Great Compline. It is used in the Roman Rite as part of the Responsory after the first reading in the Office of Readings on the 14th Sunday in Ordinary Time (along with Psalm 51). In the Extraordinary Form, in the Roman Rite Breviary; in the corpus of responsories sung with the readings from the books of Kings between Trinity Sunday and August, the seventh cites the Prayer of Manasseh, together with verses of Psalm 50, the penitential Psalm par excellence. It is used also as a canticle in the Daily Office of the 1979 U.S. Book of Common Prayer used by the Episcopal Church in the United States of America, and as Canticle 52 in Common Worship: Daily Prayer of the Church of England.

The prayer appears in ancient Syriac, Old Slavonic, Ethiopic, and Armenian translations. In the Ethiopian Bible, the prayer is found in 2 Chronicles.

View the Chapters of Prayer of Manasseh:
1