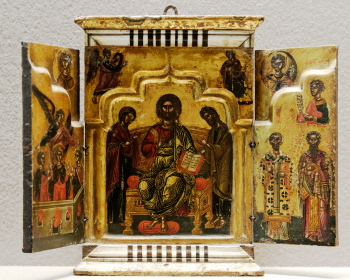 The Prayer of Azariah and the Song of the Three Holy Children, abbreviated Pr Azar, is a passage which appears after Daniel 3:23 in some translations of the Bible, including the ancient Greek Septuagint translation. It is accepted as canonical scripture by Roman Catholic and Eastern Orthodox Christians, but rejected by Protestants. (Catholics and Orthodox refer to books in their canons that are rejected by Protestants as "deuterocanonical" and refer to texts accepted by Protestants as "protocanonical"; but for Catholics and Orthodox, both sets are equally authoritative.) Article VI of the Thirty-Nine Articles of the Church of England has it listed as non-canonical (but still, with the other Apocryphal texts, "the Church doth read for example of life and instruction of manners", and the Anglican Church uses it liturgically). The passage is omitted from most Protestant Bibles as an apocryphal addition.

The passage includes three main components. The first is the penitential prayer of Daniel's friend Azariah (called Abednego in Babylonian, according to Daniel 1:6-7) while the three youths were in the fiery furnace. The second component is a brief account of a radiant figure who met them in the furnace yet who was unburned. The third component is the hymn of praise they sang when they realized their deliverance. The hymn includes the refrain, "Praise and exalt Him above all forever...", repeated many times, each naming a feature of the world.

The "Song of the Three Holy Youths" is part of the hymn called a canon sung during the Matins and other services in Orthodoxy. It can be found in the Church of England Book of Common Prayer as the canticle called the Benedicite and is one of the traditional canticles that can follow the first scripture lesson in the Order of Morning Prayer. It is also an optional song for Matins in Lutheran liturgies, and either an abbreviated or full version of the Song is featured as the Old Testament Canticle in the Lauds liturgy for Sundays and Feasts in the Divine Office of the Catholic Church.

The Prayer and accompanying Song are not found in the Hebrew and Aramaic text of the Book of Daniel, nor are they cited in any extant early Jewish writings. However, the passage does appear in certain ancient translations, notably the Greek, Syriac, and Latin versions. At the end of the 19th century, M. Gaster identified what appears to be an Aramaic original of the song and another, Bel and Draco, also missing from the canonical book of Daniel. The Aramaic text is part of a collection of ancient Jewish texts compiled by a rabbi of about 14th century, and it is known under the name of The Chronicles of Jerachmeel.

The origins of these writings are obscure. Whether the accounts were originally composed in Hebrew (or Aramaic) or in Greek is uncertain, although many modern scholars conclude on the basis of textual evidence that there was probably an original Semitic edition. The date of composition of these documents is also uncertain, although many scholars favor a date either in the second or first century B.C.

View the Chapters of Prayer of Azariah:
1