Bel and the Dragon 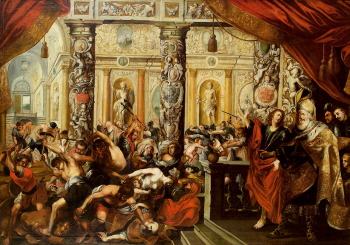 The narrative of Bel and the Dragon is incorporated as chapter 14 of the extended Book of Daniel. The original Septuagint text in Greek survives in a single manuscript, Codex Chisianus, while the standard text is due to Theodotion, the 2nd-century AD revisor.

This chapter, along with chapter 13, is considered deuterocanonical: it was rejected by Rabbinic Judaism, and while it is viewed as canonical by both Catholic and Orthodox Christians, it is considered apocryphal by most Protestants and typically not found in modern Protestant Bibles. However, the story is referenced by the Jewish poet R' Israel of Najara.

The chapter contains a single story which may previously have represented three separate narratives, which place Daniel at the court of Cyrus, king of the Persians: "When King Astyages was laid to rest with his ancestors, Cyrus the Persian succeeded to his kingdom." There Daniel "was a companion of the king, and was the most honored of all his Friends" (14:1).

The narrative of Bel (Daniel 14:1-22) ridicules the worship of idols. The king asks Daniel, "You do not think Bel is a living god? Do you not see how much he eats and drinks every day?" to which Daniel answers that the idol is made of clay covered by bronze and thus cannot eat or drink. Enraged, the king then demands that the seventy priests of Bel show him who consumes the offerings made to the idol. The priests then challenge the king to set the offerings as usual (which were "twelve great measures of fine flour, and forty sheep, and six vessels of wine") and then seal the entrance to the temple with his ring: if Bel does not consume the offerings, the priests are to be sentenced to death; otherwise, Daniel is to be killed.

Daniel then uncovers the ruse (by scattering ashes over the floor of the temple in the presence of the king after the priests have left) and shows that the "sacred" meal of Bel is actually consumed at night by the priests and their wives and children, who enter through a secret door when the temple's doors are sealed.

The next morning, Daniel calls attention to the footprints on the temple floor; the priests of Bel are then arrested and, confessing their deed, reveal the secret passage that they used to sneak inside the temple. They, their wives and children are put to death, and Daniel is permitted to destroy the idol of Bel and the temple. This version has been cited as an ancestor of the "locked-room mystery".

In the brief but autonomous companion narrative of the dragon (Daniel 14:23-30), "There was a great dragon which the Babylonians revered." In this case the supposed god is no idol, but an animal. However, Daniel slays the dragon by baking pitch, fat, and hair (trichas) to make cakes (mazas, barley-cakes) that cause the dragon to burst open upon consumption. In other variants, other ingredients serve the purpose: in a form known to the Midrash, straw was fed in which nails were hidden, or skins of camels were filled with hot coals, or in the Alexander cycle of Romances it was Alexander the Great who overcame the dragon by feeding it poison and tar.

Earlier scholarship has suggested a parallel between this text and the contest between Marduk and Tiamat in Mesopotamian mythology, where the winds controlled by Marduk burst Tiamat open and barley-cake plays the same role as the wind. However, David DeSilva (2018) casts doubt on this reading.

As a result, the Babylonians are indignant, and threaten the king if he does not give them Daniel. Daniel is handed over, and thrown into a lions' den. The prophet Habakkuk is miraculously recruited and brought to share a meal with Daniel in the den. When Daniel is found alive in the den seven days later, the king throws his persecutors to the lions, who eat and kill them.

The third narrative (14:31-42), Daniel in the Lions' Den, may be a retelling of the incident in Daniel 6:1-28, or may describe a separate incident. It has been made into a consequence of the preceding episode, but the Septuagint precedes it with the notice, "From the prophecy of Habakkuk, son of Joshua, of the tribe of Levi". Daniel remains unharmed in the den with seven lions, fed by the prophet Habakkuk, who was taken to the lion's den by an angel. The story continues:

Upon the seventh day the king went to bewail Daniel: and when he came to the den, he looked in, and behold, Daniel was sitting. Then cried the king with a loud voice, saying, Great art thou, O Lord God of Daniel, and there is none other besides thee. And he drew him out: and cast those that were the cause of his destruction into the den: and they were devoured in a moment before his face.

View the Chapters of Bel and the Dragon:
1