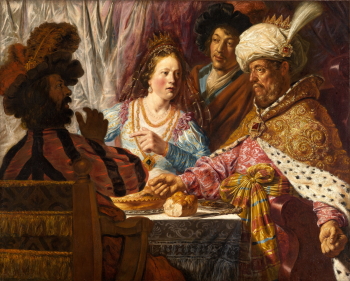 An additional six chapters appear interspersed in Esther in the Septuagint, the Greek translation of the Bible. This was noted by Jerome in compiling the Latin Vulgate. Additionally, the Greek text contains many small changes in the meaning of the main text. Jerome recognized the former as additions not present in the Hebrew Text and placed them at the end of his Latin translation. This placement and numbering system is used in Catholic Bible translations based primarily on the Vulgate, such as the Douay-Rheims Bible and the Knox Bible. In contrast, the 1979 revision of the Vulgate, the Nova Vulgata, incorporates the additions to Esther directly into the narrative itself, as do most modern Catholic English translations based on the original Hebrew and Greek (e.g., Revised Standard Version Catholic Edition, New American Bible, New Revised Standard Version Catholic Edition). The numbering system for the additions differs with each translation. The Nova Vulgata accounts for the additional verses by numbering them as extensions of the verses immediately following or preceding them (e.g., Esther 11:2-12 in the old Vulgate becomes Esther 1:1a-1k in the Nova Vulgata), while the NAB and its successor, the NABRE, assign letters of the alphabet as chapter headings for the additions (e.g., Esther 11:2-12:6 in the Vulgate becomes Esther A:1-17). The RSVCE and the NRSVCE place the additional material into the narrative, but retain the chapter and verse numbering of the old Vulgate.

By the time the Greek version of Esther was written, the foreign power visible on the horizon as a future threat to Judah was the Macedonians of Alexander the Great, who defeated the Persian empire about 150 years after the time of the story of Esther; the Septuagint version noticeably calls Haman a "Bougaion" where the Hebrew text describes him as an Agagite.

The canonicity of these Greek additions has been a subject of scholarly disagreement practically since their first appearance in the Septuagint - Martin Luther, being perhaps the most vocal Reformation-era critic of the work, considered even the original Hebrew version to be of very doubtful value. Luther's complaints against the book carried past the point of scholarly critique and may reflect Luther's antisemitism.

The Council of Trent, the summation of the Roman Catholic Counter-Reformation, reconfirmed the entire book, both Hebrew text and Greek additions, as canonical. The Book of Esther is used twice in commonly used sections of the Catholic Lectionary. In both cases, the text used is not only taken from a Greek addition, the readings also are the prayer of Mordecai, and nothing of Esther's own words is ever used. The Eastern Orthodox Church uses the Septuagint version of Esther, as it does for all of the Old Testament.

In contrast, the additions are included in the Biblical apocrypha, usually printed in a separate section (if at all) in Protestant bibles. The additions, called "The rest of the Book of Esther", are specifically listed in the Thirty-Nine Articles, Article VI, of the Church of England as non-canonical.