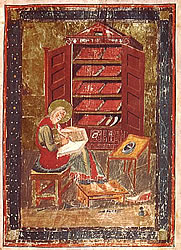 1 Esdras, also Esdras A, Greek Esdras, Greek Ezra, or 3 Esdras, is an ancient Greek version of the biblical Book of Ezra in use among the early church, and many modern Christians with varying degrees of canonicity. 1 Esdras is substantially derived from Masoretic Ezra-Nehemiah, with the passages specific to the career of Nehemiah removed or re-attributed to Ezra, and some additional material.

As part of the Septuagint translation of the Old Testament, it is now regarded as canonical in the churches of the East, but apocryphal in the West; either presented in a separate section, or excluded altogether. 1 Esdras is found in Origen's Hexapla. The Greek Septuagint, the Old Latin bible and related bible versions include both Esdras A (English title: 1 Esdras) and Esdras B (Ezra-Nehemiah) as separate books.

There is scope for considerable confusion with references to 1 Esdras. The name refers primarily to translations of the original Greek 'Esdras A'. The Septuagint calls it Esdras A, while the Vulgate calls it 3 Esdras. It was considered apocryphal by Jerome. The Vulgate book of Ezra, translated from the Hebrew was, from the 8th century onwards, occasionally split into two books, which were then denoted 1 Esdras (Ezra) and 2 Esdras (Nehemiah) respectively. Vulgate Bible editions of the 13th century, and in what later became the usage of the Clementine Vulgate and the Anglican Articles of Religion, '1 Esdras' is applied to the Book of Ezra; while the Book of Nehemiah corresponds to '2 Esdras'. Septuagint version Esdras A is called in the Clementine Vulgate 3 Esdras. The 'Apocalypse of Ezra', an additional work associated with the name Ezra, is denoted '4 Esdras' in the Clementine Vulgate and the Articles of Religion, but called '2 Esdras' in the King James Version and in most modern English bibles. 1 Esdras continues to be accepted as canonical by Eastern Orthodoxy and the Ethiopian Orthodox Tewahedo Church, with 2 Esdras varying in canonicity between particular denominations within the Eastern churches.

Overwhelmingly, citations in early Christian writings claimed from the scriptural 'Book of Ezra' (without any qualification) are taken from 1 Esdras, and never from the 'Ezra' sections of Ezra-Nehemiah (Septuagint 'Esdras B') ; the majority of early citations being taken from the 1 Esdras section containing the 'Tale of the Three Guardsmen', which is interpreted as Christological prophecy.